Graham Jenkins & 50 years as an Optician in Howick 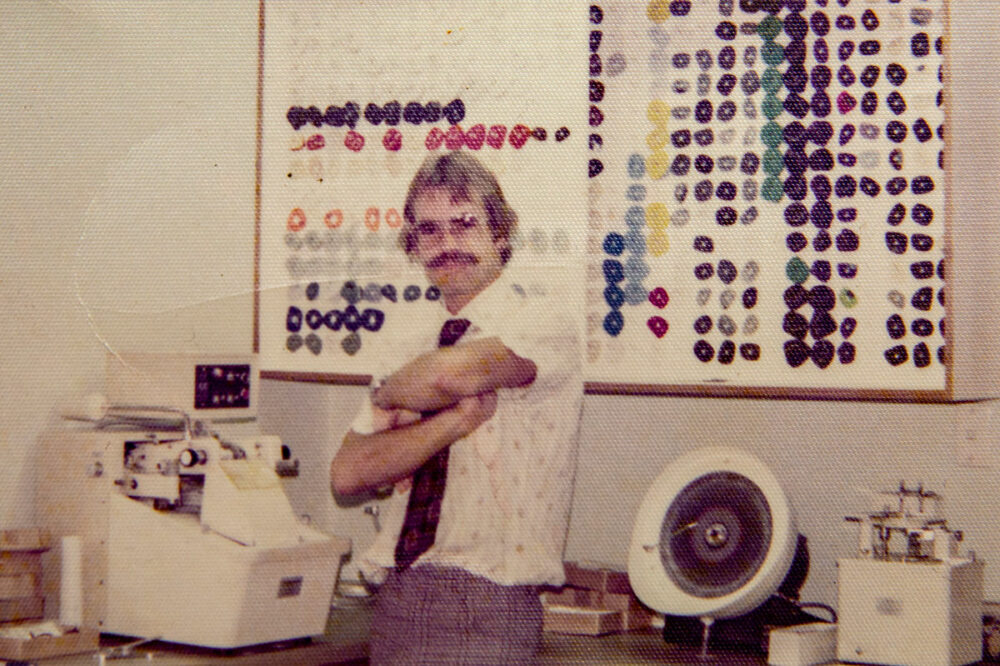 Graham Jenkins and a Half century of village views

Graham Jenkins has seen it all, he’s an optician after all – excuse the pun – and is looking back at 50 years of working in Howick Village.

He is proudly viewing a career of accomplishment, professionalism, community service and friendships, albeit in his modest, low-key and happy relaxed style.

“It’s a very pleasant occupation. You see a lot of people extremely pleased being able to see,” he says.

“Where dispensing opticians have changed is the actual hands-on laboratory workshop is nowhere as important to them as the optical side, which is about the lens and frame choice,” Graham says.

“Measurements for fitting. Accuracy and knowledge of lenses is vital. Where my old-school training comes in is the fitting of the spectacle frame.

“Dealing with people is the most satisfying part. You try to please everyone who comes to see you.

“Little kids, especially, are an absolute delight when they get their first pair of glasses. To see their faces just change, that’s a thrill.”

There are countless optical experiences that have delighted Jenkins, none more so than enabling the daughter of friends a transformation in her young life.

“She was about three years old and would not stand. Just crawl. We put glasses on her and within a week she was up walking. In a month she was flat out running around. Her parents were just blown away. They couldn’t believe the complete sudden change in their little girl.”

The business known now as Howick Village Optometrists in Picton Street started in 1960. Graham’s father Bryan worked there in 1964-65, when the then owner was overseas. 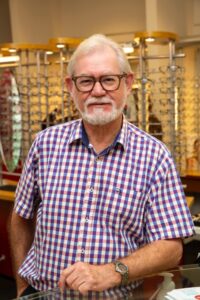 “Then Dad left and we went back to Britain in 1966. We kept the house in Howick. Upon return, we came back to Howick and purchased the business in 1968.

“I joined in 1972, which was a complete surprise to me,” he says, chuckling. “I was on summer holidays, from my job at Clark and Matheson. Bryan’s receptionist went sick and he asked me to step in and assist. I quite enjoyed it.”

To be a dispensing optometrist in that era, when Norman Kirk was to become prime minister, was by British qualification. Graham applied for membership of the British association and sent the correspondence course. “It took up a heck a lot of my time.”

After a couple of years of focused part-time study, word was circulating that the New Zealand parliament was going to enact a law to register dispensing opticians.

“Do I need a British qualification, enabling me to work in Britain? I don’t think so. I’ll just sit tight, drop this course. And through right of practise I qualified as a dispensing optician.”

Born in Stratford-Upon-Avon, in the lush West Midlands of England – Shakespeare country – the Jenkins family arrived in New Zealand in the Christmas of 1962-63.

Those who know Graham will recognise he’s a sincere and jovial man who wears his dress shirts well, maybe a throwback to his surfing days. When surfers weren’t tattooed and wearing baseball caps backwards. So it comes as no surprise that he’s always had an eye for fashion in optics, with the dare to take a chance.

“In the late 1970s, an American company came out with their brand of spectacle frames. In this period [the protectionist Muldoon years], we were under licensing, so importing was very tight. It was very hard to get your hands on anything.

“This company did an evening consisting of banners and posters of film actress Sophia Loren and her range of spectacle frames.

“I said, ‘I’ll take it’. Got it for a deal, because I was the only one at that point, and all their display material. At that time, officially, we could not have signs on buildings, posters on display to the public, and display glass frames. We had a separate room. I kitted up that room so people got invited through the door to see the glasses on display. I was one of the first, if not the first, to do this. To get around the Opticians’ Board requirements.

“Now we’re into a fashion industry, which really started in the 1980s. People are quite grateful to have a pair of glasses which look hot. Glamorous, to offset their look.”

“Glasses have always had a fashion aspect. Pictures in the 1930s, ‘40s, ‘50s, of the stars, they wore glasses. A certain panache about them. Everyday people just wore spectacle rims without much thought about fashion.

“The French and Italian – that’s where our main fashion industry is in optics. I was the first with the Sophia Loren look, which was very different.”

He describes the accepted method of fitting glasses five decades ago was conducted in the “dark room”.

“Women stood in the examination room and the optometrist would come out with a box of frames and they’d put them on without a mirror. Then they’d eventually decide if the frame fit the patient, who was told they could have it in blue, maybe brown. They never had a chance to look at frames.”

Proving again he had a maverick streak, to deliver professional service more relevant to the times and important decision, Graham made it easier and more enjoyable for customers to make their choices in glass garments.

“I built a cabinet, which I still have, that contained drawers filled with frames. I’d bring out a drawer that I thought was the right sizing for the customer, leaving them with a couple of dozen styles to select.

“The women were thrilled. ‘What do you mean? I can choose?’ They said. ‘I can try them on in front of the mirror? Wow.’ We took off.”

An early mentor for Graham was Ken Payne, who he was guided to by Bryan, for a six-month apprenticeship in Newmarket.

“He was an excellent technician, teaching me all the basics of optics. How to etch lenses, solder frames,” Graham says, of Ken.

“The growth of lens designs has been enormous. When we started it was glass. Plastic was in its infancy. In the 1970s, they were extremely “scratchable”. Very soft material. Their bonus was they were lightweight and impact resistant. Glass now, literally, is a dinosaur material.

“We get one or two people a year who insist on getting glass. The number of glass lenses available now is probably 0.5 per cent. Many lens manufacturers just simply do not have glass in their offering. And we call them glasses.

‘When I first started, optometry was definitely a separate business to retail. Slowly but surely optometrists have grown to realise that the money is actually made in retail, not in the dark room.”

There’s also the upskilling aspect to his healthcare practise to be maintained.

“You have to acquire your education points every year. Even 50 years in, I still don’t know everything. Apparently.”

The Jenkins family first lived in Mt Albert when settling in Auckland and it was a gentleman by the name of Eric Norman that guided them to Howick, where Graham schooled at Owairoa and the Intermediate.

“Howick’s a village and proud. I’m into my fourth generation in some families looking after their sight.”

Howick Village Optometrists has grown from three family members to a team of 12 staff.

There’s a strong dedication to provide a continuity of service to customer clients, because they know their history and understand the specific sight requirements.

“Due to Covid-19, we’re way behind, fully booked for a month. Most people are pretty understanding. Regarding Covid, Auckland and Auckland businesses really got hammered,” Graham says.

“The industry has lost a few wholesalers. Some smaller businesses have had to give up. The little guys are an important part of business life in New Zealand.”

He has a clear view on the optical franchises that have emerged on the retail scene over the past two decades.

“The difference between my business, an independent, and a chain store, is we believe advice comes first, then if needed, product to suit the client’s budget and requirements. The patient is enabled to hear the differences and make an educated decision.

“We’ve definitely come a long way in other aspects. In 1972, our uniform made us look like a dentist. We wore white coats. It was regarded a healthcare-focused profession. While it still is about healthcare, it’s now more orientated around the focus on customer care.”

Bryan Jenkins (my father) has just passed on, at 90. He was cavalier and adventurous, mates with Graham’s friends and they’d all go on surfing safaris up north. When it comes to being workmates, he says: “That was an interesting relationship.

“We had differences in opinions on occasions, understandably, as all fathers and sons can have, but he was a great bloke.

“In 2003, Bryan retired and at the time we had two other partners. One of them retired as well and the decision was made to buy out the final partner and bring the business back into the family.”

That is when Graham’s wife Frith joined the business. “She’s been a huge benefit. She knew nothing about the business but has managed it and kept up to date with innovations and optical developments. A real asset.

“We’ve got a very strong team. Virtually no staff turnover for the last 20 years. As my wife says, we have two families.”