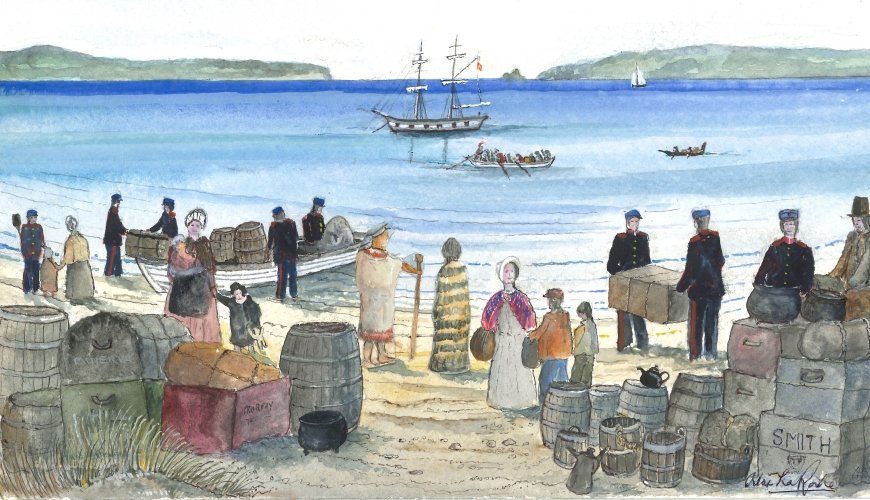 After the wars in Northland, in 1845 Governor George Grey wanted protection for the capital of New Zealand and European settlers in Auckland.

He asked Earl Grey, the Minister for the Colonies in the British Parliament, for 2500 troops.

To avoid the expense, he sent army pensioners who had served for about 20 years in the British Army or Royal Marines in China, Afghanistan or India and other areas, who were “men of good character and industrious habits, of robust frame and fit for occasional military duties” for a seven-year term of service.

They could be married and bring their children. Ten percent were unmarried. Many were worn out after harsh army life and suffered war wounds. Most had war medals.

After the seven years, providing they had obeyed all orders, including attending church parade every Sunday morning, they were given their acre of land allotment and cottage.

If they missed church parade twice, “it was a mutinous act”, resulting in losing their cottage and acre and repayment of the passage cost for them, their wife and family from Britain, which was taken out of their pensions.

The first Howick European-settler Fencibles and their families arrived at Waipaparoa Howick Beach in 1847 after a long sea voyage from Britain.

They were told that “a two roomed cottage would be ready on arrival”.

But there was almost no preparation. A few weeks earlier a few carpenters and some labourers quickly erected temporary sheds on the foreshore by the Uxbridge Road creek.

The immigrants were not impressed. Fencible James White called them “an apology for a pigsty”.

His senior Major General Pitt said: “They are totally unfit to be uninhabitable during heavy rains.”

But being mostly Irish, they put up with yet another inconvenient discrimination.

Because they arrived in November 1847 it was too late in the season to clear the land to plant wheat, oats or even potatoes.

Soon many were starving. Captain Smith was able to find a few potatoes for the list of “destitute families of Howick”.

The senior officers had Captain Smith court martialled for being generous. Fortunately, within a month, some potatoes were ready to be harvested, and Smith was acquitted.

The Fencibles and their families from the ships Minerva and Sir Robert Sale had to wait for five weeks before the Governor decided to place them at Howick.

The college vessels Marian and Undine collected the new immigrants in the Auckland harbour and brought them up the Purewa Creek where the Bishop’s tent that could hold 300 people was erected with tables of fresh meat and puddings, all from the college farm “flowing with milk and honey”.

After games they sang Rule Britannia and God Save Our Queen, then were returned to their ships.

27 October: A reception for Fencibles and their families was held at St Johns Anglican College at Kohimarama.

28 October: Four carpenters and nine labourers off the ships Minerva and Sir Robert Sale were taken to Owairoa to build two sheds to house new settlers.

21 November: The first Christian religious service was held at All Saints Church.

Read: Life for the Fencibles