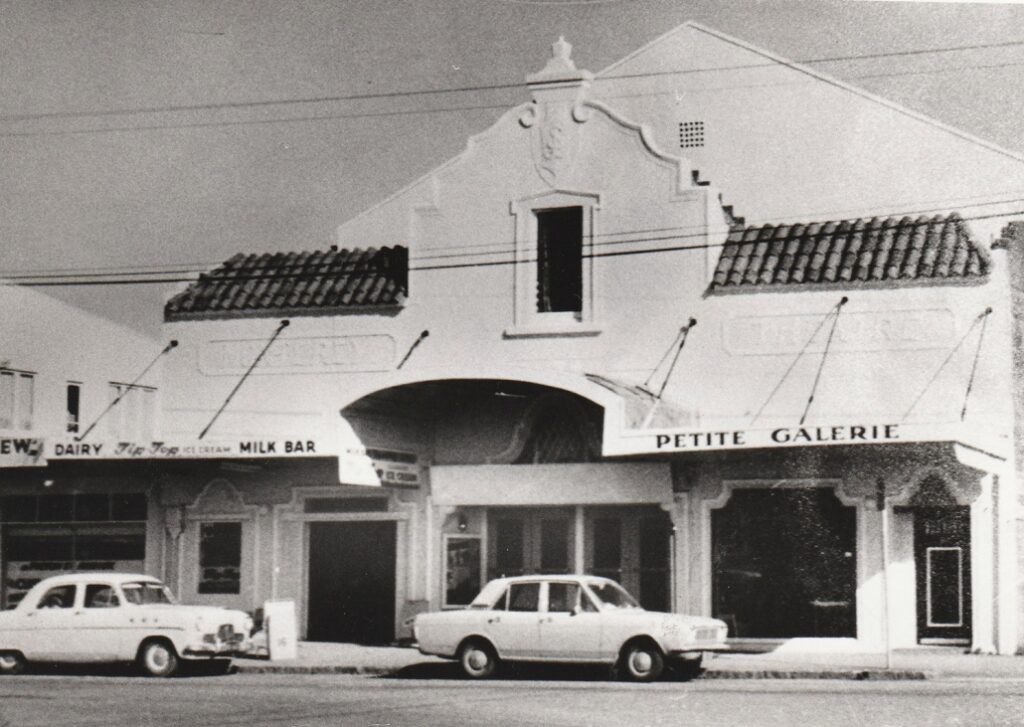 My brother John & I were post war babies, born in the late 1940’s in the wooden “nursing home” in Selwyn Road. Our family were old Howick identities. Our paternal grandfather, Gerald Hinton Knowles started the first newspaper, The Howick Post and our grandmother, Rose (Rosina) was the organist at All Saints Anglican Church.

Our father, Jack Knowles, the local Painter & Paperhanger, was also the projectionist at the Monterey Theatre, where we used to enjoy the Saturday Matinee, losing ourselves in the exploits of the superheroes of the time – Superman, Batman & Robin, & Robin Hood – sometimes interrupted by the unmistakable sound of little round orange sweets called “Jaffas”; dropped from the back seats onto the wooden floor to roll noisily under the rows of seats right down to the front.

Our family home for nearly 20 years was at 126 Picton Street. In the early 1960’s it was bought along with the two houses either side, & demolished to make way for Howick’s first Supermarket – a sad day for all of us but one of the first signs of significant change & development in the old village.

Until the Supermarket arrived, all our grocery needs were met at the familiar 4 Square Store which featured in nearly every small town in New Zealand at that time. John remembers it clearly.

“Mr Dixon owned the 4 Square on the corner of Picton and Moore Streets, almost opposite our house. One day I went to get some groceries and he had altered the checkout counter. It now had a bench sloping down from the till and flattening out at the end so the goods could accumulate at its base. The bench was about 18 inches wide (no metrics in those days) with a wooden moveable divider in the centre. In this way, one customer’s groceries could be checked off & sent sliding down one side of the divider to be bagged. Then the next customer’s purchases could be checked off and sent down the slope on the other side. That way, the two orders wouldn’t be mixed up.  This was of course a precursor to the conveyer belt check-out counters we see in supermarkets these days.”

In addition to being close to the shops & Movie Theatre, another advantage of living in the main street was easy access to special events. We both remember clearly, on the occasion of Princess Margaret’s wedding, the excitement of taking chairs across the street to join other families lined up in rows along  the pavement to watch the spectacular ceremonial occasion on the new television set in the shop window. This was long before we or many other families owned a TV!

John also remembers a “one-off” event of a different kind.

“One Summer Friday evening in the1950s, a Trolley Derby was held. Boys (with no doubt lots of help from parents) built some very stylish trolleys for the event. I recall two in particular; one looked like a speedway midget car made of wood, while the other was a four wheeled platform on which the boy lay down on his stomach with his head facing the front & steered by holding a string attached to the front axle. The race started just above the Howick bus depot opposite Stockade Hill, with crowds of spectators lining the sides of Picton Street all the way down to the Finish line by the Anglican Church.  Since the road was concrete and downhill, the trolleys picked up speed very quickly with the winner being the boy on the platform. The ‘speedway midget car’ look-alike came a close second. While I don’t remember that there were any injuries on that occasion, I don’t recall there being another trolley derby, as it was considered too dangerous.”

Probably no less dangerous & even more dramatic was a different kind of race down the main street.

“The Howick Fire Station was on the corner of Picton and Wellington Streets. All the Firemen were volunteers. When the fire siren went (a continuous siren for a fire and in later years, a different siren when the Rescue Boat was needed) I would sit by the front window in my bedroom and wait for the sound of two cars driven by volunteers, speeding along Cook Street toward Picton Street and the Fire Station. This was probably the closest thing to a road race that I can recall! Often the drivers would bring their cars to a screaming halt outside the Fire Station, jump out, often leaving the driver’s doors ajar, and race into the Station, onto the Fire Engine and off!  A very exciting event in the life of a young boy.

When we weren’t being entertained by all that went on in the main street, we both found there were other benefits in living close to the shops.

I remember being sent to Rice’s Bakery before school to get a loaf of fresh bread for lunches. On cold Winter mornings I loved going round the back of the shop to the warm bakery to watch Mr Rice sliding large trays of freshly baked sultana buns and loaves of bread out of the hot ovens. On special occasions, I was allowed to buy round sticky buns with pink icing or a larger iced bun with coconut on top, called a “Sally Lunn”. I never did find out who Sally was.

John recalls a different kind of treat from a shop on the opposite side of the road.

“When I was about 6 years old on a Saturday morning I would ride my tricycle along the footpath towards the Marine Hotel, past the Police Lock-Up (a wooden building with a single padlocked door and one bar-covered window) and onto Mr Long’s butchers shop. On many Saturday mornings Mr Long would be making sausages in preparation for the following week’s customers and sometimes I was lucky enough for him to spot me peering through his shop window. He would beckon me in to watch him make the sausages and when I left he would give me a little red cheerio to eat on the way home.”

Perhaps my very favourite place in Howick as a child was the little wooden public library regularly visited with my Dad who was an avid reader. I would go straight to the Children’s section to look at the picture books &, after I had started school, to choose from the treasure trove of wonderful books, the two or three I wanted to take home. The little library was later demolished, along with the old Town Hall, to make way for a splendid new octagonal brick library – now the Information Centre- & Howick – “a village of 3,000 people by the Sea” – continued to grow and change into the busy town centre that it is today.