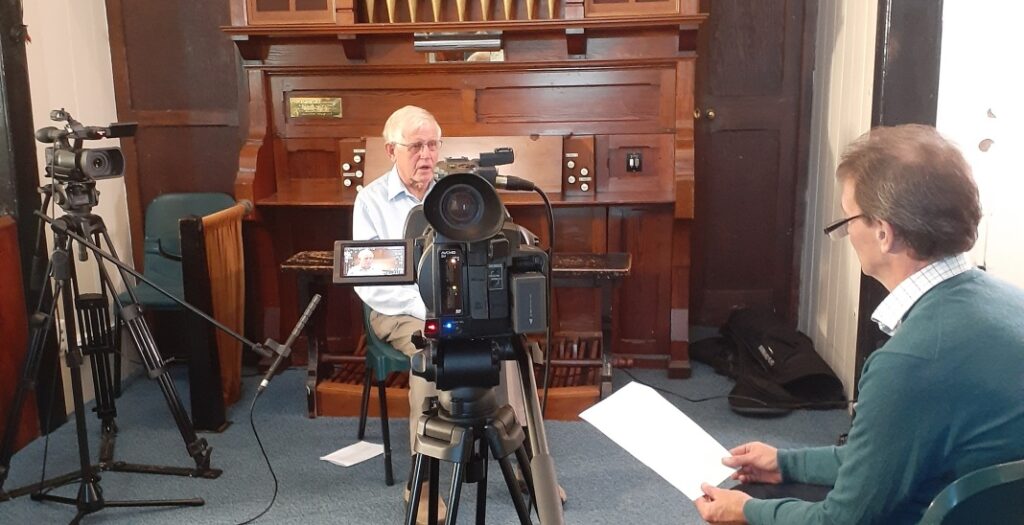 Alan La Roche and Phil Taylor chat as the cameras roll in the historic wooden Anglican church chapel, circa 1847, in the grounds of All Saints in Howick Village. Photo: Dion Edwards / Digital Mix

The Howick & Districts Historical Society has produced a series of videos about Howick Historian Alan La Roche in recognition of his expertise and dedication to heritage and historical matters in and around East Auckland, with a focus on Howick.

Society president Marin Burgess says La Roche’s development of the Howick Historical Village in Lloyd Elsmore Park, opened in 1980, cemented the story of the arrival of the Fencible families to Owairoa/Howick 175 years ago, creating a huge legacy for the nation.

“The Howick community does not fully understand the debt it owes Alan for the many years – far in excess of 50 – he has spent researching, recording, painting, sketching, talking, writing, walking, placing historical plaques and generally making sure Howick’s heritage, both Māori and European, is acknowledged and remembered,” says Burgess.

“It is a fortunate community that has such an active and engaged historian in its midst and Alan relating his history in the series of videos commissioned by the society is a fitting tribute to such an unparalleled contribution.”

Recorded at historically-significant locations in East Auckland, the video interview chats offer a unique and personal perspective of La Roche’s life and how his interest in history, archaeology, geology and, most of all, people translated into a life-long commitment.

PJ (Phil) Taylor, who interviewed La Roche, says the five-part series was filmed in the first half of 2021.

“The project wouldn’t have been possible without the considerable support, funding and determination of the Howick Historical Village/Society, led by the brilliant, friendly and thorough president Marin Burgess.”

Alan’s wife Coralie La Roche project-managed the production. She worked very hard with Alan and for many hours prepared the research material and scripts.

Dion Edwards, of Digital Mix, a Howick business (the very talented man who has filmed lots of local activities including live streaming the Howick Santa Parade), filmed the interviews with two cameras, lighting, and set up the sound desk and equipment for Ashleigh King to record. Ashleigh had just graduated from Botany Downs Secondary College.

“She found the whole project informative, interesting and was grateful for the opportunity to work on a professional production. It was great experience for her,” Taylor says.

Edwards then took the painstakingly lengthy process of editing. “He would send us three-four versions of each. He is credited for all the filming, and most of the photography, along with Ashleigh. Including the magnificent drone footage of local landmarks.”

Dion says: “It was an absolute pleasure to work with Alan, Coralie, Phil, Ashleigh and Marin to deliver this project.”

Taylor says: “Alan has done something every day for this Howick community since he was able, which is going on 80 years.

“He is the epitome of what is great about community, with the philosophy of doing good and right for his fellow citizens and environment. He is the greatest volunteer this area has known.

“He has preserved and recorded Howick’s history and our community should be forever grateful, especially when strolling and learning at the Howick Historical Village, or when admiring trees in our many public reserves. Chances are, he probably planted them.

“It was an honour to spend time with Alan, to learn more about his and Howick’s history, and to present the video series,” Taylor says.