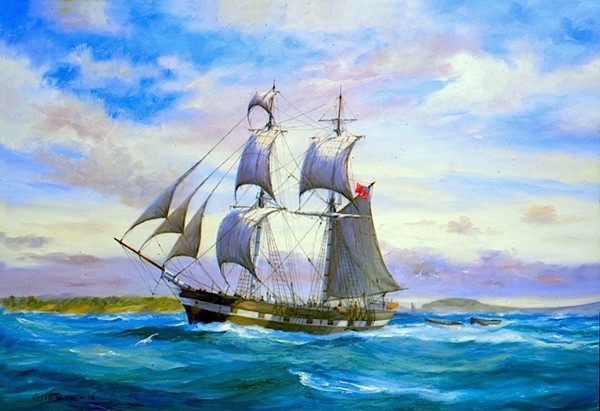 In late October of 1847 the first two ships carrying the Fencible families, the Minerva (from London, England) and Sir Robert Sale (from Cork, Ireland) were anchored in Auckland harbour.  The passengers aboard the two ships had endured a non-stop voyage of around four months.   Despite being the first government organised immigration scheme little preparation had been made for their arrival.  The tired passengers were not permitted to land but fresh meat, vegetables and medicines were all sent aboard daily.  Many of the families were disappointed by the appearance of the Auckland landscape which was still largely covered with grasslands and low scrub.

Governor Grey and Bishop Selwyn each visited the ships to welcome the new arrivals.  Bishop Selwyn decided to arrange an invitation from the pupils of the St John’s College school for the ‘little strangers’ to attend a picnic at the College grounds in what is now Meadowbank.

On the 27th of October 1847 the Bishop’s schooner the Undine and the cutter Marian were loaded with the girls and their mothers on the decks, the boys below, and set forth with their holiday cargo.  A whale boat rowed by the pupils of the English school helped, as well as canoes paddled by ‘urchins’ from the College School. They rowed their guests up the Purewa Creek – ‘before the tide ebbed on the muddy bank’ – to a spot which had been cleared by some of the College students as a flower garden and adjacent to a flat area bearing a potato crop. The contemporary Colonial Church Chronicle recorded “Still, there is many a garden flower run wild, and upon these the little damsels rushed, like bees on a bed of thyme, and each soon had a noble bouquet.”

The joy and surprise of another woman was no less, at the sight of the college bee-hives. “And there do be bees!” she exclaimed, “the Lord bless the bees; and sure sorry was I to leave my bees behind me and now, bless them – there do be bees here.”

Life in the new town of Auckland began to look a bit brighter!

A large tent the Bishop had bought with him from England, suitable for up to 300 people had been pitched on a level piece of ground where a sight most acceptable to hungry folk, was presented.  The tables were covered with dishes containing ‘a whole beef killed for the occasion and a pudding to correspond by the hundredweight – not by the pound.’

The tent was carpeted with luxuriant clover and the poles had been decorated with wreaths of flowers and native clematis.

The women behind the picnic luncheon were well known and prominent in European circles; Eliza Grey, wife of Governor George Grey, Sarah Selwyn, wife of Bishop Selwyn whose idea it all was, Mary-Ann Martin, wife of the Chief Justice, William Martin, along with other neighbours and friends. And work hard they did.

The guests made short work of the food with contemporary reports remarking the ‘clatter of knives and forks and the melody of 300 pairs of jaws made pleasant music to those who like to see children enjoy themselves.’

gives one pause to be thankful for modern conveniences.)

The dinner ended with a choir of Maori youngsters led by Doctor Arthur Purchas singing a variety of popular songs including ‘Rule Britannia’ and “God Save the Queen’ in perfect English to the evident amazement of some of the audience.

The group then made their way up the hill to the newly built small chapel where the bell was rung and the small chapel filled to overflowing with Maori and Europeans for a service of thanksgiving led by the Bishop.   The large group were then led to the College playing fields where the boys ran races, played cricket and hockey while the girls were permitted to catch a simple ball and play ‘Here we go round the Mulberry bush.’

About 4pm they were led back to the big tent for afternoon tea: 300 bread buns cut

in half and spread both thick and wide with a smear of honey added on top.  The honey was a gift from the Paihia Mission Station; the buns and milk for the tea were gifts from neighbours and local farmers.

The end of the party was signalled with two ‘fire-balloons’ which were ignited by the Bishop’s secretary to go aloft then the long process of returning everyone to the Fencible ships began.

Unfortunately, the tide had now turned, and the scarcity of ferry boats meant several people were required to spend the night sleeping on the floor of the big tent with a sail drawn over them for comfort. It was their first time sleeping on shore in four months and without the rocking of the ship they were so used to.

The final rowers returned to the College just after 2am to find Bishop Selwyn himself frying rashers of bacon over the fire for the hungry and weary crew.

Another 19 days later the Fencible families were finally taken on the brig Victoria to Owairoa beach where they were met with an even bigger shock with only limited preparation evident for their arrival.